October's highlight was performing with COLORI at the Modavision in Magdeburg! Schlemmer's Bauhaus aesthetics at a runway show. Did we fit in? No. Did we have fun? Yes! We shocked some of the security guys, and in the end COLORI even managed to get onto the runway themselves. A friend made pictures, and I still hope I might get them eventually.

Most of the October, however, was spent planning, talking, desk working, workshopping, networking. It was also amazing to finally get to know more colleagues from Bremen! Picture below shows Anna Jäger in the scenography we created at October's FreitagFreitag of Schlachthof Bremen. 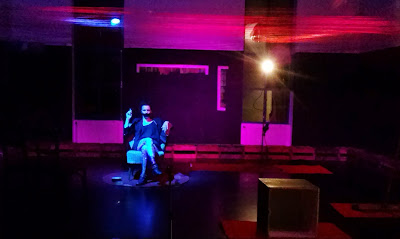 And finally some random find: 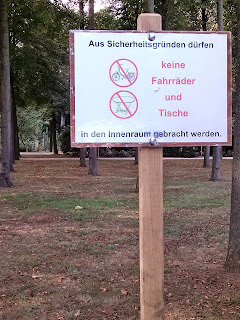 Due to security reasons bicycles and tables are forbidden in the interior. - Found in one of Bremen's parks. Still totally clueless as to what they mean.
Eingestellt von Anderland um 16:18 0 Kommentare