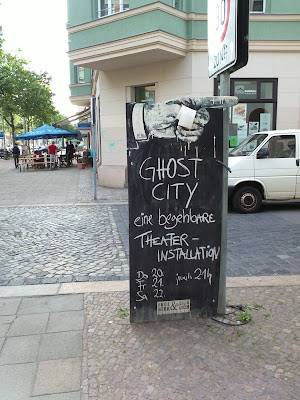 More or less the only picture from Leipzig, as there wasn't time to take any more.
Building up (THANK YOU!, Jonas & Anna!), performing, tearing down.

Ah, wait, there is one more:
Enjoy my favorite toilet space! 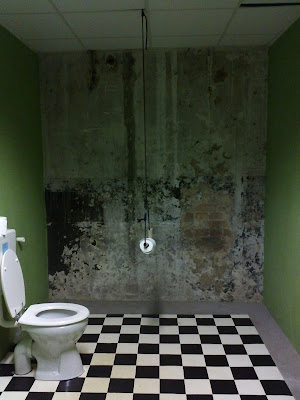 And go visit the Lindenfels Westflügel! It's an amazing building, theatre and place to meet people!

Working and recherching for Ghostcity somehow opened my eyes concerning architecture.
Remember this entry?
Around that time it started.
Having grown up in more or less rural surroundings I have this huge longing for idyllic spaces, for wood, meadows, sheep in the backyard...
But somehow this is beautiful as well: 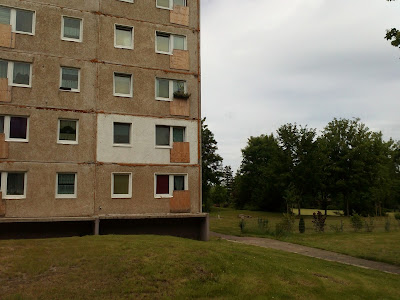 Olvenstedt, part of Magdeburg. It's rather weird to stroll through the streets, as so many houses have been teared down already, so many more are empty. It was sunday around noon, and no one was on the streets. Just those huge green spaces, many trees, and houses that nearly appeared to be lost in those greening surroundings.
We stumbled over a handball tournament later, which explained the extreme emptyness on the streets, but still.
Ghostcity gone green. 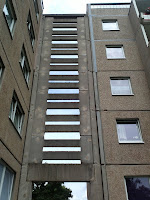 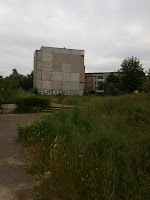 First part of the journey: Magdeburg! 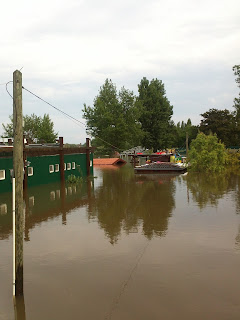 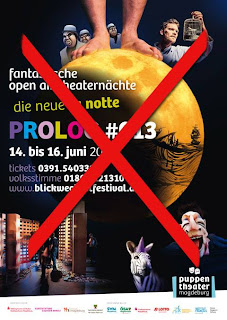 so that we didn't get further than this . The hall would have been amazing for our purposes though, and Ralf and his crew who had already started to set up the technical side of our show seemed to be great to work with..
I can fully understand the reasons for cancelling the festival.
Still. It would have been a bliss to work with the people we met and perform for Magdeburg's and the festival's audience! Hoping that it'll really be possible to postphone the whole thing to 2014!
Eingestellt von Anderland um 13:58 0 Kommentare

Unten / Down on Tour 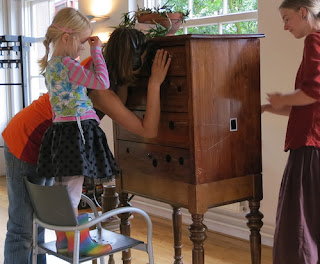 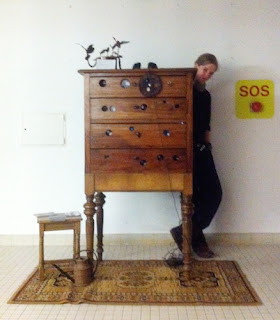 Thanks for amazing audiences!
There have been other towns & festivals as well, but I've yet to learn to either take a camera myself or to contact people who take pictures immediately - once I'm with a spectator it's hard to jump after someone.

Apart from touring Life & Art & Theatre still hold me firmly in their grips, which is the reason for this blog's bareness. But soon another building period will come, and with it hopefully one or another photograph of stuff in progress.
Eingestellt von Anderland um 12:44 0 Kommentare